What’s in the crates?

Just before midnight on a fresh autumn night, a truck pulls away from Conishead Priory laden with crates.

Heroic Kadampa volunteers had worked for hours under flood lights to help load the truck with a very precious cargo.

This was another shipment from the Kadampa Art Studio to the new Temple site at IKRC Grand Canyon, Arizona – the biggest to date.

Inside the crates were 6 vajras, 20 auspicious sign plaques, 4 deer, 2 Dharma wheels, and 44 corner pieces for the auspicious signs, with the deer travelling together – two to a crate :-) 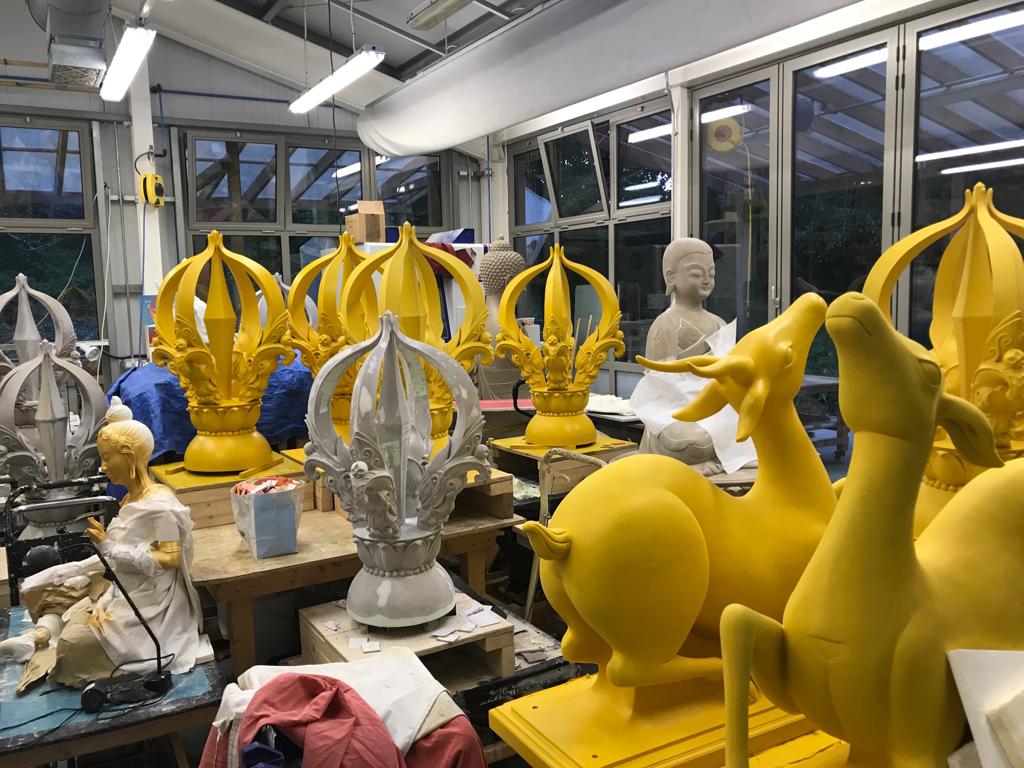 In the large crates were the components to construct the lantern structure at the top of the Temple, all of which had been made at MKMC along with the lantern base that was included in the previous shipment. The red trusses form the main structure of the lantern and the copper curves will be gold-leafed as decorative features.

Still to come from the Studio are the decorative finials and the crown vajra for the lantern tower, which will be specially made with a lightning conductor inside.

The gold-impregnated glass is sourced in the USA.

The close coordination between the teams at Manjushri KMC and IKRC Grand Canyon is a wonderful illustration of the International Kadampa Buddhist Union at work under the auspices of the International Temples Project, both founded by Venerable Geshe Kelsang Gyatso Rinpoche.

And the selfless dedication of the Kadampa workers is powerful testament to the vision and inspiration of Venerable Geshe-la.

Thank you Venerable Geshe-la for your extraordinary vision, and thank you to everyone helping to bring it into being.

Connected & uplifted in a troubled world

Protection from all fears and dangers

Sevilla now has a special color & a special magic

The Joy of a Kadampa Life

Back to school at Manjushri KMC

A Magical Week in Retrospect