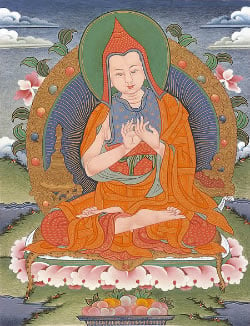 Although Buddhism had been introduced into Tibet some two hundred years earlier by Padmasambhava and Shantarakshita, Buddhist practice in the country had largely been destroyed during the anti-Buddhist purges of the Tibetan king, Lang Darma (circa 836 AD), a follower of Bön, the pre-Buddhist religion of Tibet.

Invited by Jangchub Ö, a ruler of Ngari in western Tibet, Atisha was asked to present a Dharma that everybody could follow and that would show how all the paths of Sutra and Tantra could be practiced together.

In response, Atisha wrote Lamp for the Path, the original Lamrim text that served as the basis for all subsequent Lamrim instructions. The revival of pure Buddhist practice in Tibet at this time was largely due to Atisha.