A Pure Land in Arizona

In the fall of 2019, the fifth Kadampa Temple for World Peace, based on the mandala and the heavenly mansion of Buddha Heruka, Buddha of Compassion, was inaugurated in the peaceful surroundings of the IKRC Grand Canyon. Both the special five-tiered architectural design and the sacred art within reveal that the temple is a representation of the Pure Land of Heruka Buddha and Vajrayogini Buddha.

It is a modern Buddhist Temple designed by Venerable Geshe Kelsang Gyatso Rinpoche, a world-renowned Buddhist meditation Master who has pioneered the introduction of modern Buddhism into contemporary society. 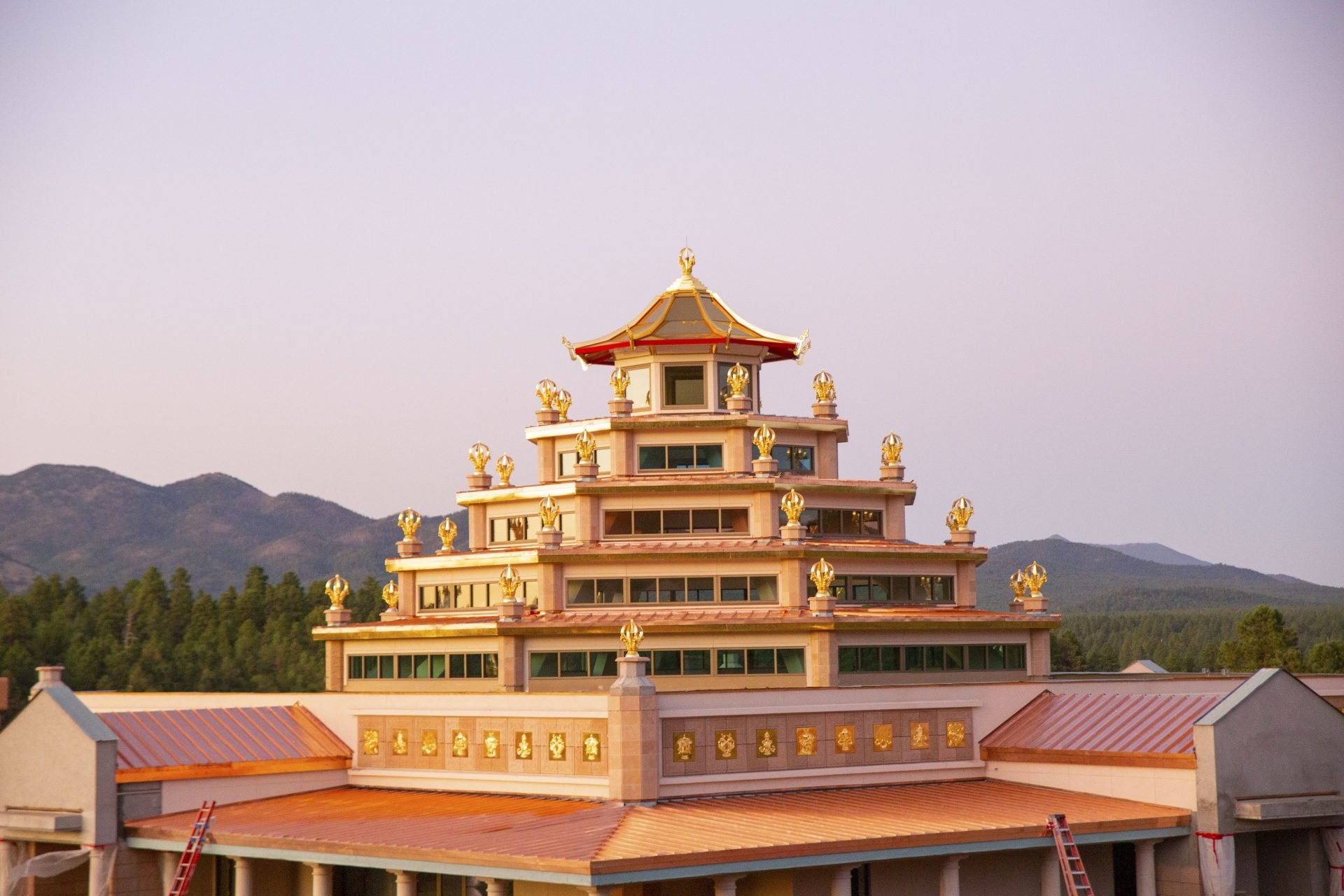 A unique place to visit 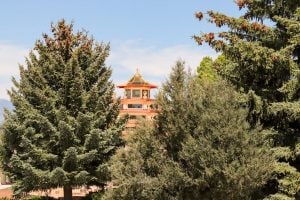 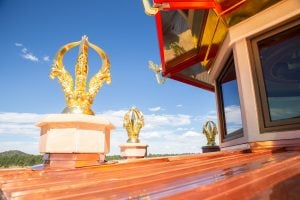 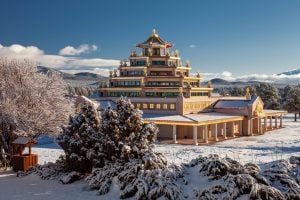 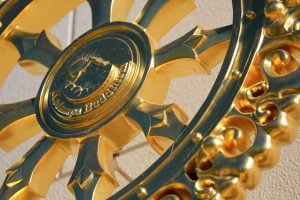 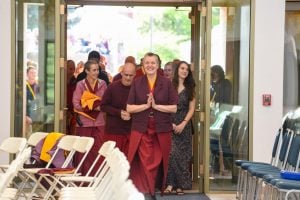 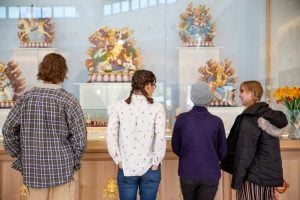 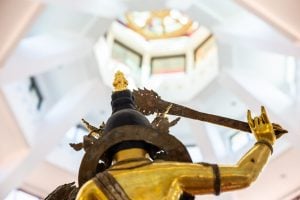 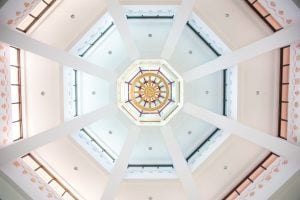 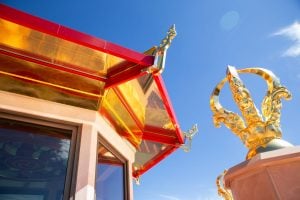 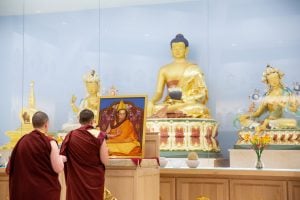 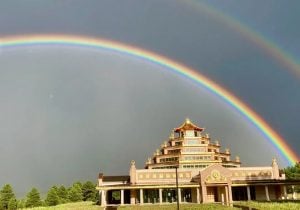 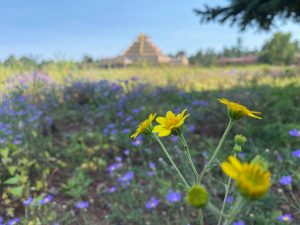 MODEL FOR THE FUTURE

The shrine at IKRC Grand Canyon, is regarded as the model for future Kadampa Temples and KMCs.

In the center section is Buddha Shakyamuni with Avalokiteshvara on his right and Arya Tara on his left. Either side stand stupas.

In the right section as we face it are the five lineages of the Wisdom Dharma Protector, with Thousand Armed Avalokiteshvara above.

And in the left section are Je Tsongkhapa with his Sons, the founder of the New Kadampa Tradition.

Modern Kadampa Buddhists rely sincerely on Je Tsongkhapa and regard their Spiritual Guide as his emanation through whom they receive special oral instructions.

Accordingly, in front of Je Tsongkhapa in the shrine there is a statue of the holy Spiritual Guide flanked by Heruka and Vajrayogini, the principal Highest Yoga Tantra Deities of the tradition.

Either side, at the top of the shrine are the collected works of Venerable Geshe Kelsang Gyatso Rinpoche, the precious scriptures of Modern Kadampa Buddhism. 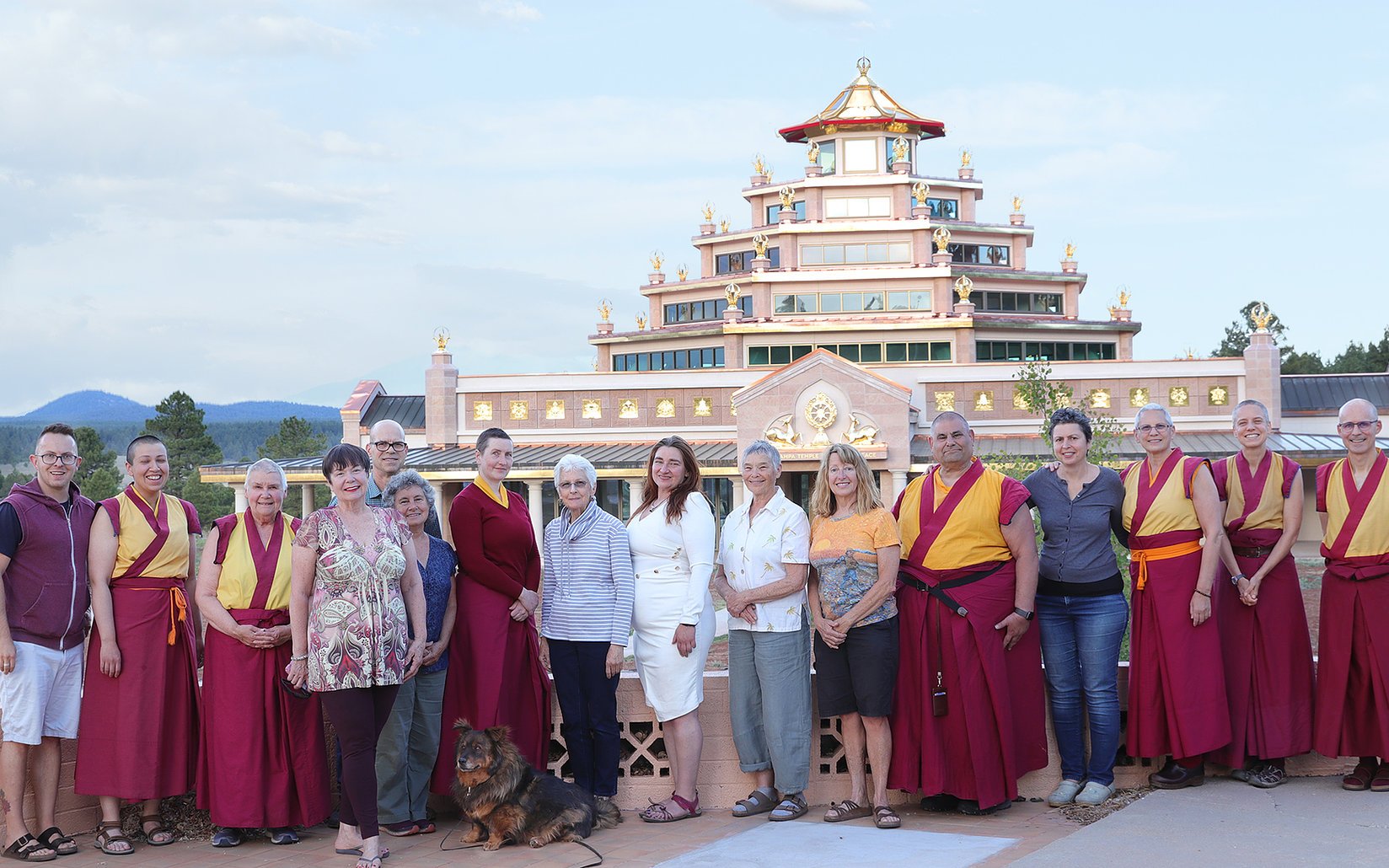 The Resident Teacher at IKRC Grand Canyon is Gen-la Kelsang Jampa, who is Deputy Spiritual Director of the New Kadampa Tradition.

As a senior NKT teacher, Gen-la Jampa has been a student of Venerable Geshe Kelsang Gyatso Rinpoche for many years, and under Geshe-la's guidance has taught at many centers and events around the world.

Gen-la is well-loved for his clear and inspiring teachings and his ability to touch people's hearts through his sincerity and loving-kindness.

Located in Williams, Arizona, IKRC Grand Canyon is surrounded by stunning mountain scenery, as well as forests and lakes. 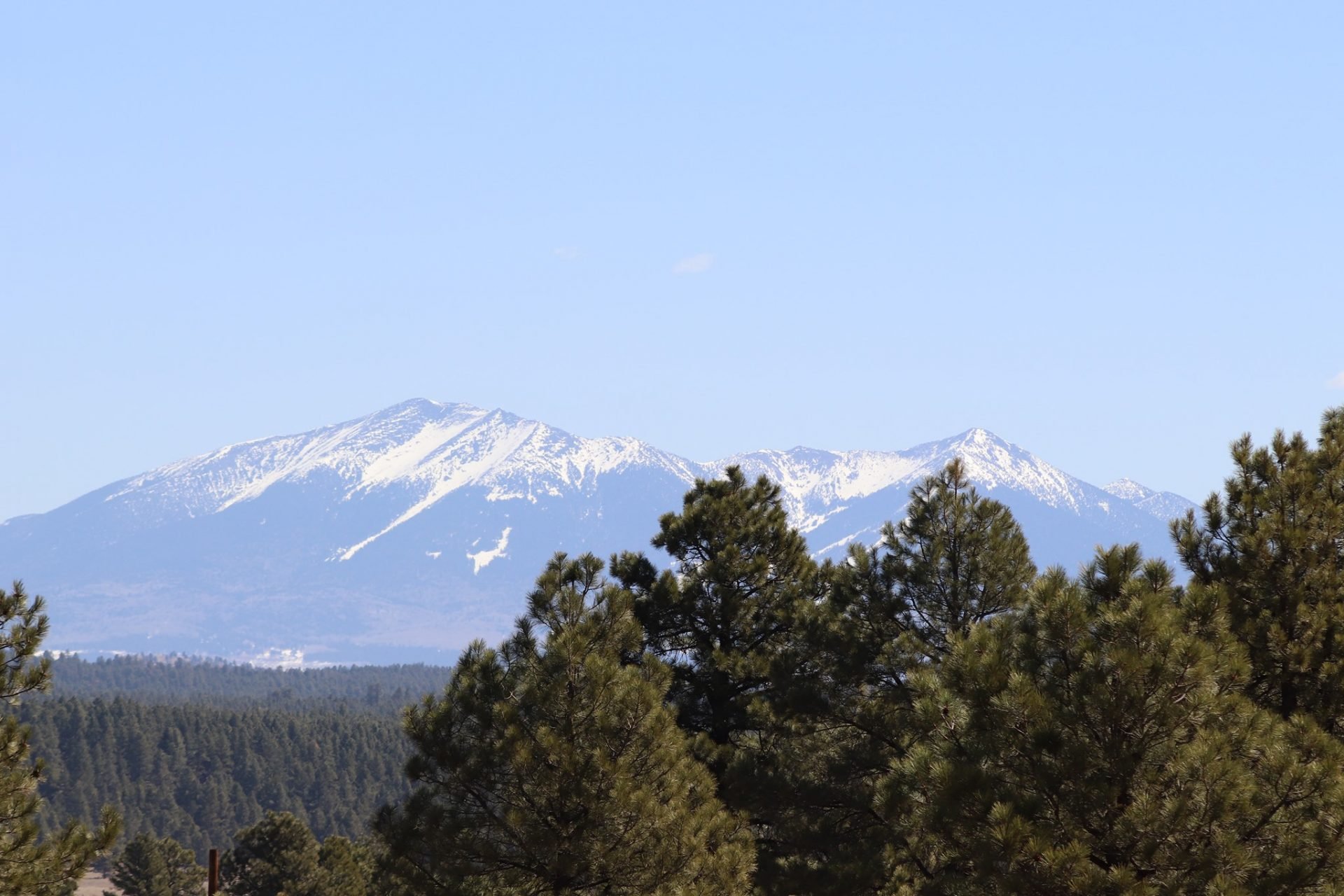 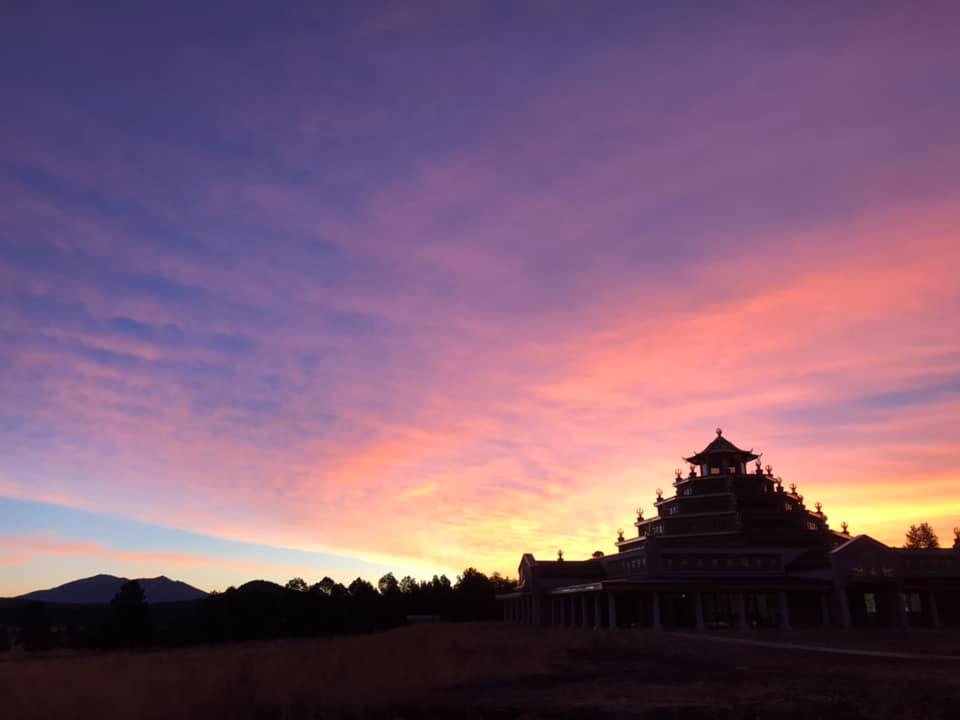 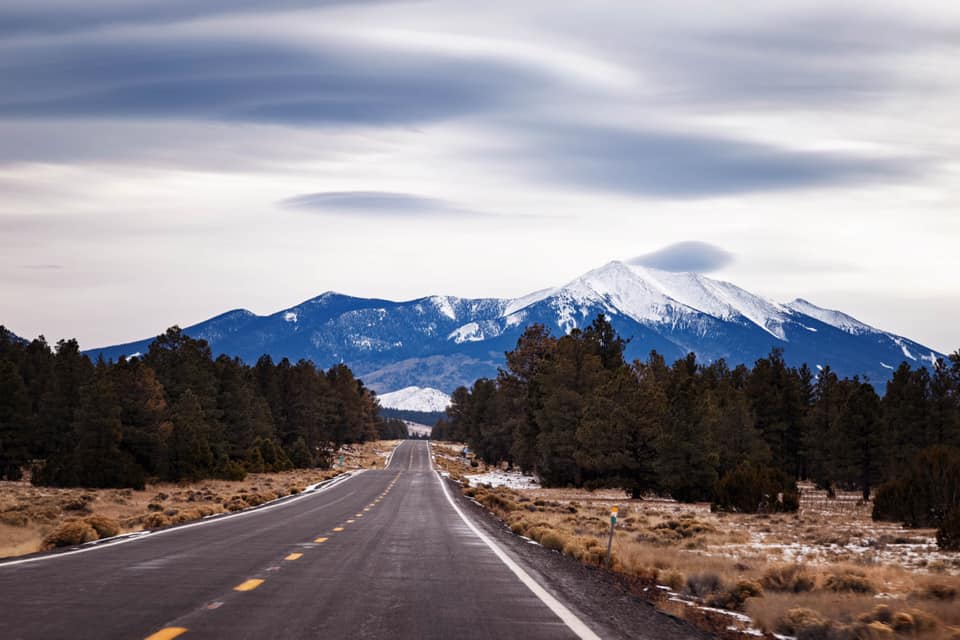 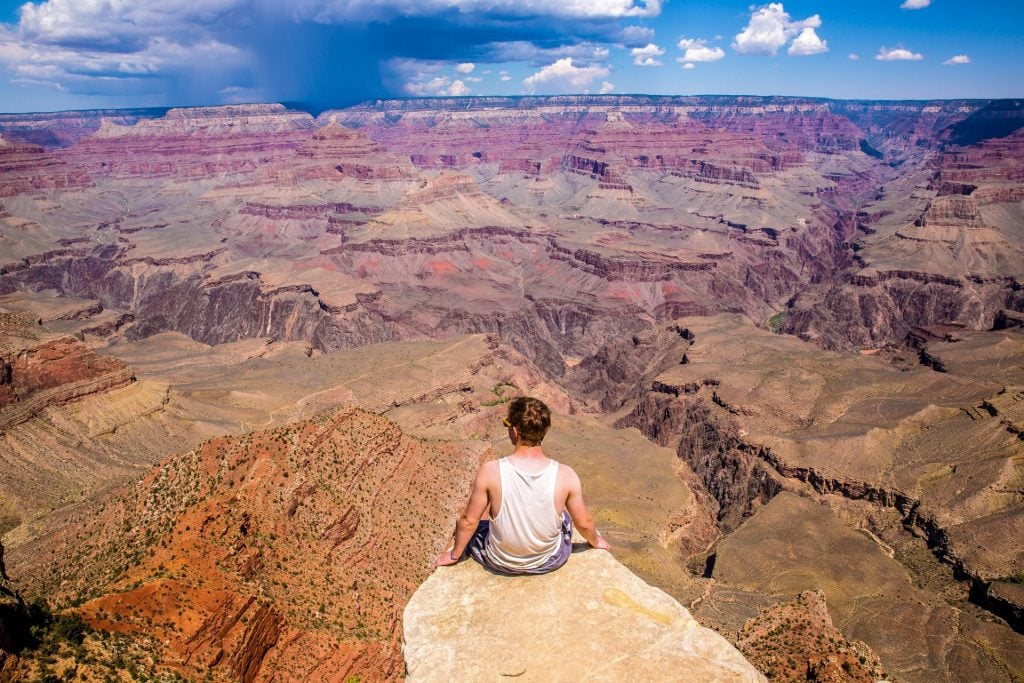 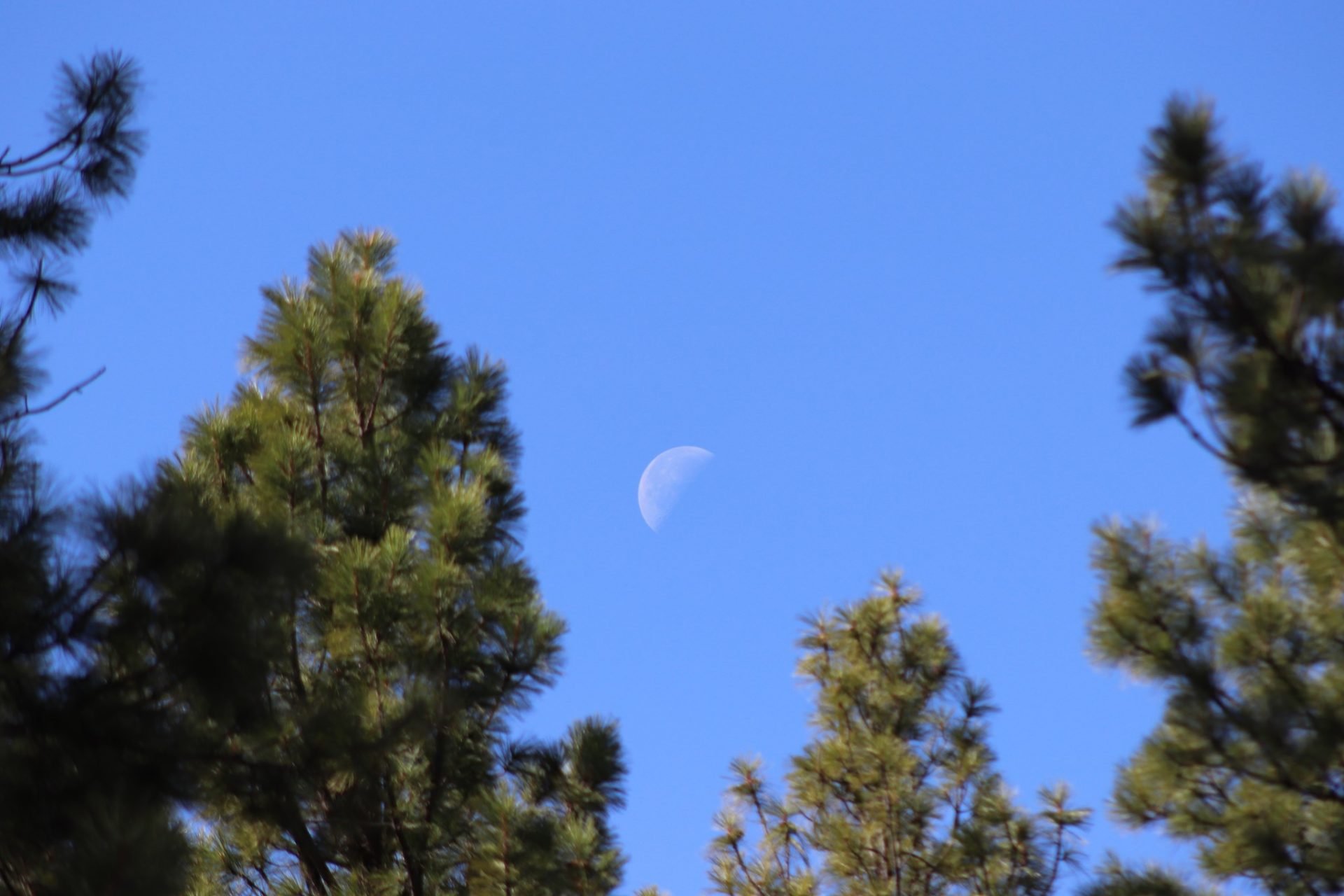 There are many ways to join in the activities at IKRC Grand Canyon.

Regular weekly classes are held in the Temple at which a Teacher introduces an aspect of modern Buddhism and shows how we can apply it to our daily lives.

There are many opportunities to attend the center as a volunteer visitor. See the IKRC Grand Canyon volunteer page for more details and the application form.

IKRC Grand Canyon has a full spiritual program that runs throughout the year that besides the evening classes offers day courses, weekend courses, retreats and International Festivals.

Visit the International Kadampa Retreat Center Grand Canyon's website for information on how to participate.

A person browsing in the book store.