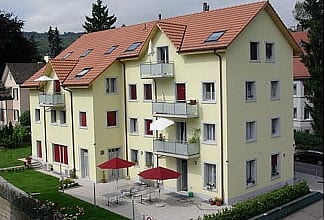 Vajradhara Zentrum in Zurich Switzerland was established by Geshe Kelsang in 1992 and is the principal and largest NKT–IKBU Center in Switzerland.

It provides Kadampa Buddhist meditation classes, study programs, workshops and retreats for all levels of practitioner.

Over the years, the Center has opened branches in many cities such as Geneva, Luzern, Lugano, Bern and Basel, which have now grown into independent Centers in their own right.

In 2002 the centre bought and completely rebuilt a car showroom in the west of the city, which in 2003 was opened as a beautiful new Temple.There are 13 residents living there in 5 apartments.
The Temple has a beautiful shrine, containing 19 Buddhas.

There is a Dharma shop, with Buddhist books, statues, and ritual items. Within the Center is also a world peace cafe that sells teas, coffees, cakes and vegetarian meals.